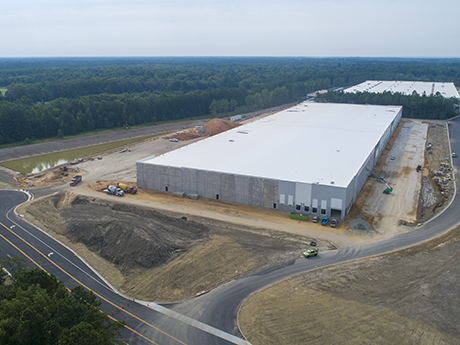 At the mid-year mark, industrial occupancy in the greater Richmond area remains strong, closing with an overall occupancy rate of 98.5 percent in the categories being tracked (Class A, B, select C vacant and investor-owned product with a minimum of 40,000 square feet total RBA).

Richmond’s strategic Mid-Atlantic location along Interstate 95 provides access to 55 percent of the nation’s consumers within two days’ delivery by truck, and in addition to being the northernmost right to work state on the Eastern seaboard, Virginia has once again been named as the No. 1 state for business by CNBC.

Metro Richmond has a civilian labor force of almost 700,000 (1.03 million population) with unemployment rates at 3.7 percent as of June. With 12 Fortune 1000 companies located in the region, Richmond is home to the most Fortune 1000 headquarters compared to other mid-size markets in the nation. Richmond is located approximately 90 miles from the active Port of Virginia in Norfolk, which features six terminals with berths up to 50 feet deep. The port is the only East Coast port with Congressional approval to dredge to 55 feet.

June was the port’s fourth consecutive month of cargo volumes of 314,000 TEUs (20-foot equivalent units) or more, and the month’s activity helped elevate the port’s total TEU volume for fiscal year 2022 (FY22) to a record-breaking 3.7 million units. The FY22 TEU volume increased 14.7 percent when compared with FY21, which was the port’s previous best fiscal-year performance. The cargo volume was primarily the result of an increase in loaded imports, as well as investments in equipment and infrastructure.

Becknell Industrial constructed two buildings on its recently acquired 83.4-acre parcel known as Sauer Industrial Center. Building 1, located at 943 S. Airport Drive, is a 446,692-square-foot fulfillment center that is currently leased to Mondelez International, a cookie and cracker manufacturer with products such as Oreo, Nilla Wafers and Wheat Thins.

Building 2 spans 279,319 square feet and has a completion date of August. The building consists of 2,250 square feet of spec office, with modern attributes including an ESFR sprinkler system, LED lighting with motion sensors and ample dock packages.

Becknell has also recently completed Building 3 of the four-building Airport Logistics Center in eastern Henrico (129,700 square feet). The facility has 32-foot clear heights with an ample dock package and modern features. Building 4 (87,500 square feet) is soon to be under construction with a fourth-quarter 2023 completion date. Including the existing buildings, a total of 805,190 square feet is planned in four buildings on the site. (Cliff Porte of Porter Realty is the exclusive leasing agent for both the Sauer Industrial Center and Airport Logistics Center.)

Denmark-based The LEGO Group announced plans to invest over $1 billion to construct a 1.7 million-square-foot manufacturing facility on a 340-acre site at Meadowville Technology Park. LEGO will break ground later this year, and construction is expected to take place over a 10-year period and will feature an on-premises solar energy farm to handle the facility’s power needs.

The international toy company plans to begin operations from a temporary building in early 2024, creating an initial 500 jobs. The permanent factory will begin production in the second half of 2025, creating a total of over 1,700 jobs. LEGO Group was founded in Billund, Denmark and its products are sold in more than 130 countries worldwide. Meadowville Technology Park is located in the southeast quadrant of the metro Richmond area in Chesterfield County. Additional companies in the park include VITA, Digital Fortress, Cartograf, Niagra Bottling, Medline and Amazon.

In May, Chesterfield County approved the rezoning of 2,400 acres for a proposed development dubbed Upper Magnolia Green. A 1,700-acre portion of the site is for a proposed technology park and public facilities while a 700-acre eastern portion will include up to 600 single-family homes and 150 acres for future public schools and a library. This project site is in the southwest quadrant north of Hull Street Road (Route 360) and is bisected into its western and eastern portions by a future expansion of Powhite Parkway that would connect to Hull Street Road.

Amazon’s new robotics fulfillment center is well underway just north of the raceway in Henrico County. The 2.6 million-square-foot facility should be completed in the spring of 2023. The facility is the first of its kind for Richmond and is being developed by Texas-based Hillwood. Amazon has stated its plans to sublease/renegotiate at least 10 million square feet of leased space around the country as online shopping has slowed since the pandemic.

DHL, an international shipping and express mail company, is expanding operations in Richmond with a new 39,000-square-foot facility near the Richmond International Airport in Henrico County. The new facility, which opened in June, is a $7 million investment for DHL. The freight company was formerly located off Parham Road, also in Henrico County, in a building almost 87 percent smaller. This expanded footprint will allow them to process more packages and increase the number of couriers in the area.

Virginia Gov. Glenn Youngkin recently announced that EAB, the leading provider of education research, technology and marketing and enrollment solutions, will be investing $6 million to relocate to Innsbrook on West Broad Street. The company will be relocating from two locations on East Parham Road to a single 70,000-square-foot facility. The move should create about 206 new jobs in Henrico County.

Very recently announced by QTS Data Centers is a 1.5 million-square-foot expansion of its Richmond Mega Data Center located in eastern Henrico County. The company has acquired an additional 200 acres and could encompass up to 240 megawatts across the additional space.

The data center currently hosts the Richmond Network Access Point (NAP), which provides access to more than 20 network providers and four transcontinental subsea cables (which offer the fastest data speeds on the planet). Prior to 2019, there was no connectivity in Virginia, today 18 percent of the East Coast internet traffic comes through Henrico County.