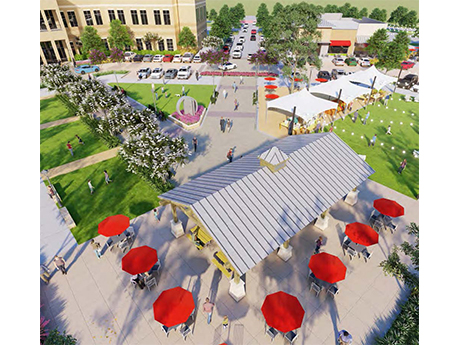 NEW FAIRVIEW, TEXAS — Rockhill Capital and Investments has acquired Shoop Ranch, a 1,807-acre plot of land in New Fairview. The tiny city of fewer than 2,000 residents is located approximately 30 miles northwest of downtown Fort Worth.

Rockhill plans to build a massive mixed-use project on the site, which will include 4,150 single-family homes, 900 multifamily residences, shops, restaurants, offices, public spaces and government buildings such as schools, a town hall, public pool and fire station.

“The [city] council and staff are focusing on maintaining our current rural feel, natural elements and open space, while creating a development and city center where people can live, work and play,” says Ben Nibarger, New Fairview’s city administrator. He notes that the city and Rockhill have been planning the development for about a year.

“New Fairview is in a position for growth, and we are working with the city to thoughtfully plan a thriving community that will satisfy the needs for a city hub and additional housing, while also celebrating the area’s natural beauty,” says Jennifer Alexander, project manager at Rockhill Capital and Investments.

The Shoop Ranch property features more than 1.5 miles of Oliver Creek, which offers fishing locations for bass and perch. Rockhill plans to retain the area around the creek and its tributaries as public green space. The proposed master plan includes pedestrian hiking and biking trails.

Rockhill will also help fund infrastructure improvements to support the project, such as water, sewer and high-speed internet upgrades, as well as the expansion of County Line Road into a four-lane highway.

Infrastructure construction for the master plan is scheduled to begin in two to three years. A timeline for the rest of the project was not disclosed.

Based in nearby Frisco, Rockhill Investments is a commercial and residential developer with experience in land development and construction management.