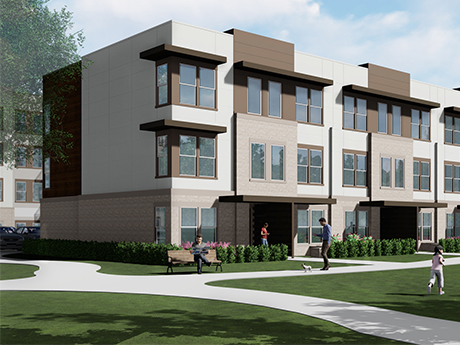 Pictured is a rendering of Phase II of The Tobin Estates, Rosewood Property Co.’s project in San Antonio that is a redevelopment of the estate of longtime San Antonio arts patron Robert L.B. Tobin. Though not as glamorous as the narratives of Austin and Dallas, the growth story of San Antonio is impressive and is marked by demand for housing that is steadily rising.

San Antonio’s multifamily market is realizing its own potential. New nodes of development are emerging, and new projects are meeting pent-up demand for higher-quality renter experiences.

Today, developers are building multifamily projects that they wouldn’t have considered five or 10 years ago. They’re no longer stuck in their comfort zones, afraid to venture into new submarkets. And they’re no longer worried that they won’t be rewarded with the rents necessary to provide differentiated properties with unit diversification, higher-end finishes and increased amenities.

That wasn’t always the case, though. In 1860, San Antonio was the largest city in the Lone Star State. It thrived as a center for the cattle industry until the 1930s, when its population fell behind that of Houston and Dallas, mostly because of the booming oil industry.

Today, San Antonio’s metro area is the 25th-largest in the country with 2.6 million residents, according to Oxford Economics. Hispanics represent 55.1 percent of the population — the highest share among the five major Texas metros and the largest Hispanic population of any metro in the country.

San Antonio’s population is projected to grow by 28 percent over the coming decades. The population of the metro area is expected to top 4 million people by 2050, according to Alamo Area Metropolitan Planning Organization.

Plenty of people who want to take advantage of what Texas has to offer — more space, a better quality of life, a lower cost of living — have been priced out of other markets (or they don’t appeal). That brings folks to San Antonio, which offers a family-friendly environment and a rich history while remaining relatively affordable.

In the past, job growth has been a hindrance to San Antonio, which boasts a labor force of 1.2 million. It’s worth noting, however, that it has proven to be more recession-resistant and pandemic-proof than other major markets.

With a diversified economy including healthcare, tourism, banking, manufacturing and government, the city is home to more than 400 corporate headquarters, including those of regional grocery chain H-E-B and insurance company USAA.

Over the past 12 months, employment in San Antonio has grown by 4.2 percent, while hourly wages have risen 5.2 percent to $26.27, according to the Bureau of Labor Statistics. The unemployment rate fell to 4.2 percent in December, the lowest rate since March 2020.

During the three months ending in December, San Antonio’s labor force expanded by an annualized rate of 2.7 percent, slightly above the nation’s 2.1 percent gain. More than 100,000 new jobs are expected to be created from 2020 to 2025, driving demand for apartments.

A Leader in New Supply

San Antonio is the 23rd-largest multifamily market in the country, according to RealPage, with an inventory of 213,098 completed units as of December 2021. The metro area has long been a national supply leader, with its apartment base growing by a stunning 31.9 percent over the past decade.

San Antonio’s existing multifamily supply has historically been concentrated in a handful of submarkets and featured similar levels of finish outs. This lack of differentiation has hampered rent growth historically since price alone is the only remaining differentiating factor.

Moreover, San Antonio’s rental market has always felt pressure from single-family housing. In fact, some would say its for-sale residential market is an Achilles heel — housing affordability has encouraged a lot of folks in their late 20s and early 30s to pursue homeownership.

But even historically inexpensive markets such as San Antonio are experiencing decreased home affordability. Today, there’s a healthy spread between owning a home and renting a large apartment, which drives apartment demand and product differentiation.

Demand for multifamily units in San Antonio continues to rise, driven by an influx of new residents and an increase in household formation. Over the past 12 months, net absorption totaled 10,529 units, according to Yardi Matrix. This represents an increase of 3,382 units from the previous year’s gain of 7,147 absorbed units.

Yardi Matrix reported a marketwide occupancy rate of 94.5 percent at year-end 2021. New-lease asking rents were $1,204 per month, up 12.5 percent from the previous year, placing San Antonio 48th overall in year-over-year rent growth. While this ranking may sound unimpressive, it’s actually an incredible feat for a market where the previous decade’s peak was much more modest at 4.5 percent in 2011. Estimated rent growth for 2022 is 9 percent.

As of December 2021, 50,592 units were in development across the San Antonio metro; 11,472 have already broken ground, according to Yardi Matrix. Among those under construction is Rosewood Property Co.’s second phase of The Tobin Estates Apartments, construction of which began in January 2022.

Located in Oakwell Farms area of north San Antonio, the community sits on 44 acres of The Tobin Estate, the former home of the deceased long-time San Antonio arts patron Robert L.B. Tobin. The entire multifamily development, which is planned for three phases, is surrounded by a forest of 100-year-old oak trees.

Though developers in San Antonio have historically been biased against three-bedroom units, thinking they wouldn’t lease well because families preferred to buy homes instead, the three-bedroom units of Tobin Estate’s initial phase were the first to be fully leased.

Families love the three-bedroom units at Tobin Estates because, unlike most three-bedroom units in other communities, those at Tobin Estates offer three bathrooms. Of equal importance, the units are located on the first floor, providing a great layout for older people who want extra space for visitors or a home office, as well as families who want the ease and convenience of ground-floor living.

Plenty of millennials, empty nesters and military personnel call Phase I home too. In fact, 10 to 15 percent of residents are proud military, either active or retired. (San Antonio ranks in the top 10 among U.S. metro areas in terms of the largest concentrations of federal government and military workers.)

Phase II will include two four-story buildings with a total of 311 apartment homes. And given the popularity of Phase I’s larger units, Rosewood is diversifying the development’s living options by including a building with seven townhomes.

San Antonio has emerged an investor favorite for multifamily acquisitions, development and financing. For example, when Rosewood was ready to move forward with Phase III of Tobin Estates, it took only a few days to obtain loan terms from several different lenders.

The development company locked down a bank loan by the end of the week — further proof that institutional investors look at San Antonio far differently than they did 10 years ago. That altered view will fuel even more growth in the future.