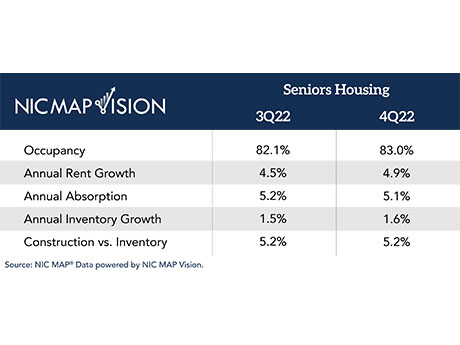 The seniors housing occupancy rate increased for the sixth consecutive quarter due to continued strong demand that outpaced inventory growth. Because new inventory has been added during the pandemic, however, the occupancy rate has not yet reached pre-pandemic levels, according to NIC.

The trend of high demand and slow inventory growth has been consistent throughout 2022. Fewer than 11,000 units were added within the NIC MAP Primary Markets last year, the weakest inventory growth since 2014. This contrasted with robust demand, with net absorption for the year registering a record 27,845 units. Combined, these conditions allowed the occupancy rate to rise 260 basis points since the beginning of 2022.

“Development activity slowed sharply in the second half of 2022 as the rise in interest rates and a more stringent lending environment slowed loan issuance,” says Beth Burnham Mace, NIC’s chief economist. “With higher interest rates expected in the early months of 2023, slower development pipelines are likely to continue, which could continue to impact inventory growth and therefore positively affect occupancy rates.”