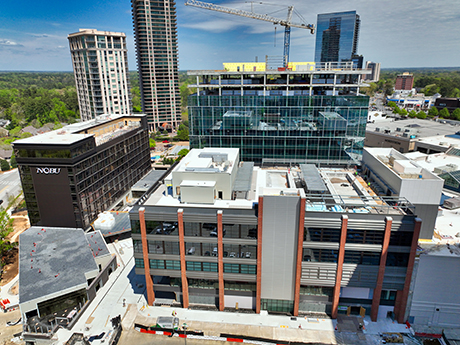 One Phipps Plaza is a 13-story, 365,263-square-foot, LEED-certified, Class A office tower in Atlanta.

ATLANTA — Simon Property Group has topped out One Phipps Plaza, a 13-story, 365,263-square-foot, LEED-certified, Class A office tower in Atlanta. The project includes the redevelopment of the former Belk department store at Phipps Plaza, a mall in Atlanta’s Buckhead neighborhood.

The property’s first tenant is Novelis, a provider of aluminum rolling and recycling. Novelis will lease 90,000 square feet of space at the property and will use the building as its corporate headquarters. Other tenants slated to open at Phipps Plaza include Nobu Hotel & Restaurant, Life Time athletic club and Citizens Culinary Market. The 150-room Nobu Hotel will feature a pool, conference center, spa, and a Japanese restaurant called Nobu Atlanta Restaurant.

Dallas-based The Beck Group is the architect and general contractor for the project.