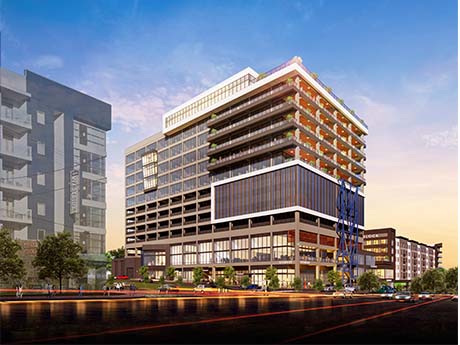 ATLANTA — SJC Ventures has signed several new tenants to join Phase II of The Interlock, a $750 million mixed-use development underway in Atlanta’s West Midtown district. New concepts joining include Starbucks, Kura Revolving Sushi Bar, Salon Lofts and Five Guys. SJC Ventures expects to announce a new round of tenants in the near future. In addition to the newly announced restaurants and salon, the second phase of The Interlock will be anchored by a 42,000-square-foot Publix grocery store, 670 student housing units for Georgia Tech students, 275,000 square feet of commercial space and limited restaurant opportunities. Construction on Phase II began in May 2021, and SJC Ventures plans to fully open the second phase in 2024. Phase II of The Interlock will be connected to Phase I, which is anchored by a Puttshack, the Bellyard hotel and Rooftop L.O.A., via a one-acre public park.