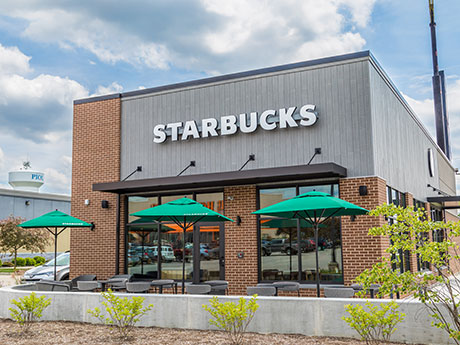 Starbucks Coffee has announced plans to open 2,000 new stores by 2025. A newly constructed Starbucks location (pictured above) recently traded hands in a transaction brokered by Cooper Commercial Investment Group. The property is located in Piqua, Ohio.

SEATTLE — Starbucks Coffee (NASDAQ: SBUX) has announced plans to open 2,000 stores by 2025 and invest $450 million in its North American real estate, which will include the modernization of existing locations across the United States.

The announcement took place during the company’s 2022 Investor Day conference in Starbucks’ hometown of Seattle. The company’s reinvention plan includes the implementation of a store design that streamlines work behind the counter, enabling better connection with the customer. Starbucks also plans to reorganize its real estate portfolio to include a greater number of pick-up stores and drive-thru-only and delivery-only locations.

“When we think about our existing store portfolio and our investments, they must deliver in a few critical areas,” said John Culver, group president for North America and chief operating officer. “Reducing the level of complexity and making work easier for our partners; enabling stronger engagement and connection between our partners and the customers they serve; and delivering experiential convenience.”

Further details on the planned store expansion and upgrades to existing domestic locations were not disclosed.