Posted on May 18, 2022 by Taylor Williams in Conference Coverage, Features, Multifamily, Student Housing 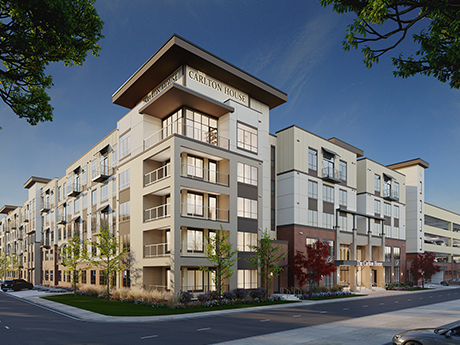 Pictured is Carlton House, a 446-bed student housing development by Houston-based Treemont Partners that is nearing completion and will serve students at Texas Tech University. Some industry experts believe that rents for properties in major student housing markets like Lubbock have not yet peaked and will continue to rise as more students target large state schools in the future.

As a subcategory of multifamily that is currently experiencing record rent growth, student housing is increasingly becoming a sought-after commodity in the world of institutional investment, according to a panel of industry experts.

More institutional love for student housing is also arriving at a time in which concerns about COVID-19’s impact on enrollment and on-campus learning at the nation’s colleges and universities are largely being laid to rest. The verdict is in on whether students overwhelmingly prefer to live and learn on campus — they do. Capital sources are responding accordingly.

At France Media’s 14th annual InterFace Student Housing conference, held May 3-4 at the J.W. Marriott Hotel Austin (Texas) Hotel, a group of industry veterans laid out the drivers behind the sector’s growth on institutional radars.

As an affirmation of this trend, the “state of the industry” panel pointed to the $12.8 billion acquisition of Austin-based student housing developer and operator American Campus Communities (NYSE: ACC) by real estate giant Blackstone (NYSE: BX).

Panelists implied that that deal, which was announced in April and will take ACC private, serves as a watershed moment for the asset class to institutional investors. As such, the transaction, which is expected to close in the third quarter, should also have a domino effect on the volume and type of capital flowing into the space.

“Institutions tend to follow institutions,” said panelist Ryan Lang, vice chairman of multifamily capital markets at Newmark. “When a company like Blackstone buys a $13 billion portfolio and takes a publicly traded company private, it creates a lot of confidence in the space overall. Blackstone is a very intelligent group that’s not going to make a $13 billion purchase on a whim. So this should bring more institutional capital into the space.”

Panelist Justin Gronlie, managing director at Chicago-based Harrison Street, noted that the student housing industry has now seen four publicly traded REITs taken private in recent years, including the Blackstone-ACC deal. The execution of those mergers and acquisitions brought more numerical data on the performance of the student housing market into the light, further illustrating the sector’s investment viability to skeptical capital sources.

Now, however, with much of that consolidation activity complete, there is less transparency overall within the industry in terms of comps and averages for rents, sales price and other key financial metrics.

“For a long time, the industry really needed the data to show Wall Street and the broader investment community that student housing can be institutionally owned and operated,” said Gronlie. “We’re now at a place where enough capital and investors have seen the light and where data isn’t mission-critical for the [growth of] the industry.”

The panelists agreed that while consolidation within the industry at the hands of institutional investors has reduced overall data transparency, the emergence of new property technology platforms is doing a nice job in reversing that pattern. The “state of the industry” panel at the 14th annual InterFace Student Housing conference, from left to right: Ken Carl of Kayne Anderson; Ryan Lang of Newmark; Alex O’Brien of Cardinal Group; Isaac Sitt of Vesper Holdings; Donna Preiss of The Preiss Co.; and Justin Gronlie of Harrison Street.

“Data is streamlined and arrives in real time, which should help to bring in more institutional capital,” said Lang. “The trend of mass consolidation and institutionalizing of the space should continue given the scaling opportunities, as well as the yields in other asset classes, particularly multifamily, which we’re most often compared to.”

Panelist Isaac Sitt, co-founder and principal of New York City-based investment firm Vesper Holdings, acknowledged that there were still some red flags within the space that could give institutional investors pause. Specifically, returns in the student housing sector generally pale in comparison to those of traditional multifamily assets.

Enrollment patterns are also shifting somewhat to favor major institutions of higher learning, as well as smaller schools that are located on the fringes of large urban centers, he said. Demand for student housing at smaller schools in more remote locations is therefore considerably weaker.

“We are seeing a lot of kids want to attend major flagship state schools or schools that are near major metropolitan areas,” said Sitt, citing Kennesaw State University in metro Atlanta as a prime example of the latter trend. “Those schools are doing very well, but a lot of secondary and tertiary schools have fewer kids wanting to go there.”

“Furthermore, if you look at the demographic trends among kids turning 18 over the next 10 years, they’re not extremely favorable,” continued Sitt. “More of those kids, as well as international students, will want to go to those big schools. So there are some smaller markets that are hurting.”

Rents on the Rise

Still, Sitt conceded that overall, the U.S. student housing industry still has room for rent growth, which more institutionally driven consolidation could facilitate. He also noted that his company’s portfolio was on track to experience a 6 percent rent growth on a year-over-year basis and was 85 percent preleased for the upcoming semester, both of which represented record figures for Vesper Holdings.

“We came out [of the pandemic] aggressively, but not at the rates we’re at today, and we leased up very quickly,” he said. “So next year, there will be room to continue to be aggressive. If we come out next year at our current rates instead of the rates we renewed at last year, you’re looking at massive rental growth next year.”

“While ACC has always been a phenomenal operator, they haven’t always pushed rates the hardest,” continued Sitt. “With Blackstone as a partner, they could come out more aggressively on rental rates, and that will help support the market as well.”

With any asset class, a potentially future higher ceiling for rent growth on top of rates that are already at historic highs is bound to attract institutional capital.

Donna Preiss, CEO of The Preiss Co., an owner-operator based in Raleigh, was among the first panelists to point out this rather fundamental draw that student housing currently offers the institutional world. Preiss also used her firm’s portfolio, which comprises some 33,000 beds across 50-plus markets, as a bellwether for the larger industry performance.

“Our in-place occupancy is 96.2 percent, which is probably the best we’ve ever had in May,” she said. “We’re 86 percent preleased — also the best it’s ever been. Within 49 of our 52 markets, our properties are performing better than they did last year, which is also a record-high proportion. And we expect double-digit revenue increases for 2022.”

Preiss noted that part of the revenue growth was attributable to the burning off of concessions to tenants, another factor that that should serve to attract institutional investors. And while her company’s portfolio is also experiencing record highs for certain expenses — payroll, repairs/maintenance, insurance — ultimately those costs are more than offset by rent growth.

“At the end of the day, rental rates are so phenomenal, and when we consider that many of us are seeing record velocity behind those rates, we realize that we could have pushed rates even more,” Preiss concluded. “What that means is that next year, when we’d normally be projecting 2.5 to 3 percent growth, we could be budgeting twice that much. And that’s pretty amazing.”