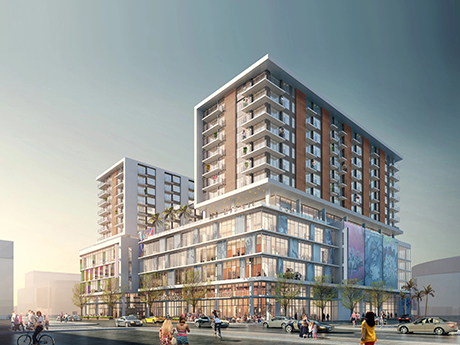 There is no denying in-migration is a driving factor in South Florida. Over 650,000 people moved to Miami at the height of the pandemic — nearly 89,000 came from out of state and a quarter of those came from New York. Year-over-year job growth is up 6 percent and is back at peak levels seen prior to the pandemic, while over 27 percent of employment is in office-using sectors for the first time ever.

CBRE’s Spring 2022 Occupier Sentiment Survey revealed that most companies are back to developing long-term plans to expand or contract their office space now that employees are returning — at least some of the time — after two years of mostly remote work.

For the second quarter in a row, net absorption in Miami totaled over 200,000 square feet, with the majority occurring in Miami’s central business district (CBD). Driven by expansions, Class A product accounted for approximately 85 percent of total absorption in the first quarter.

Nine of the top 20 venture capital deals in 2021 were led by founders who relocated to Miami in late 2020 or in 2021. While leasing activity has slowed during the first quarter of 2022 compared to the pace seen in mid-2021, new-to-market tenants accounted for 72 percent of leases signed this quarter.

Due to a lack of supply of Class A space in Miami, the vacancy rate in the CBD is at an all-time low of 10 percent.

Nevertheless, tenant tours remain strong. CBRE is currently tracking over 1.2 million square feet of active tenant tours, with financial services, technology and healthcare being the top industries in the market.

This increase can be attributed to new-to-market tenants moving from higher cost markets such as New York, California and the Northeast. In the case of the newest major project in Miami CBD, 830 Brickell, asking rents for the penthouse have increased to $150 per square foot, which is in the tier of premier New York spaces.

To escape high rents, many companies are relocating to Class A buildings in Downtown Miami and Wynwood. These buildings accounted for 44 percent of the entire market’s absorption in the first quarter of 2022. Wynwood has dominated new development in office product over the past two years.

However, with 1 Southside Park currently under construction in the CBD, and another 4.4 million square feet of office product in planned development, the CBD is poised to once again be a major submarket within the next few years.

Tenants that want to locate in the Brickell, CBD or Wynwood submarkets are looking for buildings with Class A amenities, such as conferencing facilities, fitness centers (with showers), cafés or restaurants and updated finishes in the common areas. Proximity to restaurants and shopping, as well as easy access to Interstate 95, are also important factors.

Based on what amenities tenants are looking for, many landlords of older Class A buildings are now finding it necessary to completely renovate their common areas with upgraded finishes and, if possible, add a conference facility, fitness center and café or restaurant just to try to compete with the newly constructed buildings that are coming on the market.

— By Clarissa Willis, Senior Associate, CBRE. This article was originally published in the May 2022 issue of Southeast Real Estate Business.