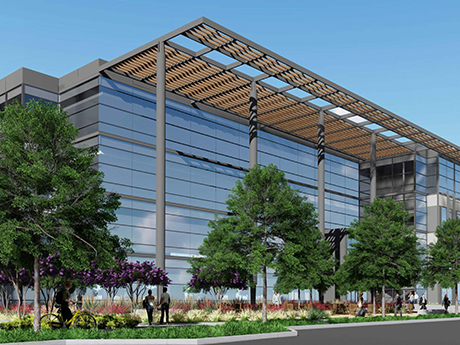 Hillwood recently broke ground on this 135,000-square-foot speculative office building at Alliance Town Center. As the market displays a flight to quality, landlords are banking on the belief that the inclusion of top-notch amenities will effectively lure tenants back to the office.

Dallas-Fort Worth (DFW) is a hot market for commercial real estate right now, with people from across the country relocating to the area every day.

The metroplex’s population is growing at an annual rate that rivals those of other top U.S. markets, including Austin, its neighbor to the south that is often considered to be a more glamorous city.

With the increasing number of businesses relocating to Texas and more offices opening back up, the urban core of Fort Worth has become a particularly popular destination for industry growth in Texas.

The performance of Fort Worth’s office market has been particularly encouraging since the start of 2021. Overall, the city’s office vacancy rate currently stands at 13.3 percent, down from a pandemic-era high of 14 percent in the third quarter of 2020.

This positive trend is aided by a quicker “return to office” in DFW. According to research from Kastle Systems, a security company that provides access control systems for office buildings around the globe, Texas as a whole has outpaced major cities and other states in terms of the speed and degree to which office occupancy rates have been recouped.

Kastle Systems has been publishing weekly data on office physical occupancy for throughout the course of the pandemic. According to the company’s Back to Work Barometer Average, which surveys 10 major cities, the major Texas metro areas have outpaced the field. With the most recent data points arriving on May 18th, the average physical occupancy across the survey’s 10 cities was 43.3 percent.

We continue to see a trend of flight to quality, with many users chasing new construction and renovated, highly amenitized buildings. This pattern speaks to employers’ efforts to establish their office environments as places employees actually want to be versus where they are required to be. Landlords are responding to this tenant desire by considering or moving forward with the addition of amenities in buildings that lack them and further rethinking what those amenities are.

Before the pandemic, the typical office building amenity package was a fitness center, conference center and a deli/dining venue of some form. Coming out of the pandemic, tenants are highly focused on conference facilities and now care more about green space and outdoor areas for their employees to decompress.

We are seeing more and more landlords introduce both indoor and outdoor tenant lounge spaces that are wired for Wi-Fi and can also include putting greens, yard games, streaming lounges and various seating options. Newly constructed office buildings are also increasingly becoming part of or proximate to mixed-use developments that deliver a “live-work-play” atmosphere, especially with regard to urban infill locations.

As is the case in major markets across the nation, one of the prominent stories in the Fort Worth office market centers around rising costs. We have seen upward pressure on quoted rents for office space in Fort Worth due to increasing construction costs for ground-up new developments, as well as for capital expenditures and tenant finishes in existing buildings.

Tenants have shown a willingness to accept these increased rents so long as tenant improvement dollars contributed by landlords also increase. Along with rising costs, many construction jobs are also experiencing delays due to the current supply chain issues that, as is the case around the globe, are being acutely experienced in Fort Worth.

Because of these delays, many tenants are starting to look for new spaces earlier than they may have pre-pandemic. For example, an average-size tenant for Fort Worth with a requirement in the 2,500- to 3,500-square-foot range previously would have likely started its search for office space three to six months out from its expected move date. Now, many of these same tenants are starting their searches seven to 10 months out to allow for more time to complete the interior buildouts of their new spaces.

Despite construction and other challenges, developers remain bullish on Tarrant County as a destination for office users. There are currently five buildings totaling 297,500 square feet of Class A office space under construction in Fort Worth. Another 2.2 million square feet of projects have been proposed and could potentially be added to the development pipeline.

The brokerage community views this as a positive indicator for the market’s long-term prospects and as proof that Fort Worth is an expanding market that is desirable to users and investors alike.