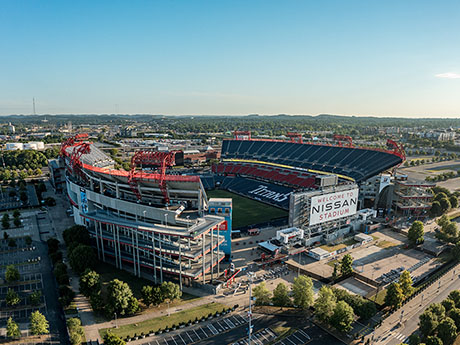 The new arena will be situated in Nashville east of the Tennessee Titans' existing arena, Nissan Stadium (pictured).

NASHVILLE, TENN. — The NFL’s Tennessee Titans and the Metropolitan Government of Nashville and Davidson County (Metro) have agreed to terms to bring a new $2.1 billion football stadium to Nashville’s East Bank district. The enclosed stadium will span 1.7 million square feet and will be situated near the Cumberland River to the east of the Titans’ current arena, Nissan Stadium.

The site for the new stadium currently comprises surface parking lots. Once complete, the project will represent the largest building project in the Metro’s history and will attract marquee events such as the Super Bowl and CMA Fest country music festival, according to ESPN.

“When my father brought this team to Tennessee 25 years ago, I don’t think he could have imagined a better home for our organization,” says Titans controlling owner Amy Adams Strunk. “The way the people of Tennessee have embraced this team as their own is truly something special, and I am thrilled that with this new agreement, we will cement our future here in Nashville for another generation.”

Funding for the new stadium comprises four categories, with football-related sources (i.e. the Titans, the National Football League and personal seat license sales) representing the largest source of funding for the new stadium at $840 million. Other categories include a $500 million contribution from the State of Tennessee and $760 million in revenue bonds issued by the Metro Sports Authority that will be repaid via a 1 percent hotel/motel tax and sales and use taxes generated by the stadium and its vendors.

Proponents of the new stadium claim that the deal will save taxpayers at least $1.75 billion, which consulting firm Venue Solutions Group estimates is the minimal cost it would take to maintain Nissan Stadium over the course of the remaining 17 years of the Titans’ lease. The lease for Nissan Stadium, which was signed in 1996, legally obligates the Metro to provide a “first-class” stadium until 2039.

“This new stadium proposal protects Metro taxpayers by not spending a single dollar that could be spent elsewhere on our core priorities like education and public safety,” says Nashville Mayor John Cooper. “Doing nothing was not a legal option for us, and renovating the current stadium proved to be financially irresponsible, so we are proposing a new stadium paid for by the team, the state, tourists and spending around the stadium.”

With the new stadium in the works, the Titans will return a total of 66 acres back to the Metro, including the site of Nissan Stadium. The Titans have agreed to maintain and backstop upkeep over the life of the new lease, and Metro will own the stadium when the lease expires.

The new lease will run for a minimum of 30 years, and the new stadium could be ready as early as the 2026 NFL season. Additionally, the venue will be home to up to four Tennessee State University (TSU) home football games each year, and TSU will have a dedicated locker room in the facility. The school will also pay no rent under this new deal.

Costs of stadium-related infrastructure and demolition of Nissan Stadium are built into the deal, and the Titans have agreed to cover any construction cost overruns. The agreement is subject to approval by the NFL and the Metro Council.