The Great CRE Resignation: What Texas Companies Need to Know 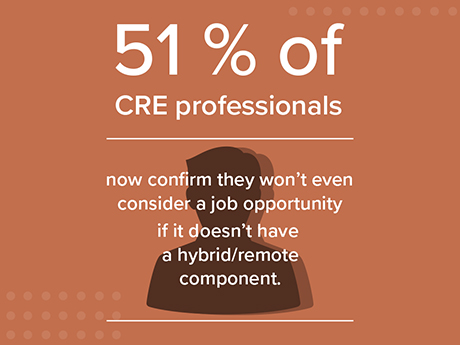 By now, we’re all familiar with the Great Resignation ­— workers’ mass exodus from their jobs during the pandemic.

The phenomenon hit just about every office-using industry, including commercial real estate. In fact, our firm recently conducted a survey of 200 individuals in the industry on job sentiment, which revealed that more than 75 percent of respondents intend to or would consider leaving their current company this year.

The trend has affected Texas in a very profound way. According to the Bureau of Labor Statistics, more Texans quit their jobs in September and October 2021 than did workers in any other state.

So, what can commercial real estate companies — particularly in the Texas markets — do to maintain a productive and happy workforce and remain competitive in the field? Here are a few recommendations for companies looking to attract and retain talent in the current work environment based on our 20 years of experience as a national recruiting firm for the industry.

Be Willing to Bend

These days, flexibility is an essential quality at companies where people want to work. This largely began with the pandemic.

The business community’s recognition that employees can be productive working from virtually anywhere opened up a world of opportunities for workers that was previously unavailable to them. Remote work has become so acceptable that, in some cases, people can live where they want without having to worry about commuting to the office. And with many companies adopting hybrid work schedules, fitting in that afternoon exercise session or child’s school play performance has become more realistic.

In Texas specifically, working from home has been a robust trend for quite some time. According to employment data tracking group ThriveMyWay, more than half of Texans living in major cities like Dallas, Houston, San Antonio and Austin hold jobs that have always allowed them to work remotely. In addition, 57 percent of men and 50 percent of women who participated in this survey say remote work has a positive effect on their mental health.

The truth is, the choice to work from home at least a couple days a week has become one of the most important perks a company can offer employees. Our firm recently ran a LinkedIn poll, which garnered 34,000 views and over 1,000 responses in less than a week. This survey revealed 51 percent of those surveyed would reject a new commercial real estate job opportunity simply because it didn’t offer a remote or hybrid option.

Also, 95 percent of respondents believed employers should offer the option of at least one day per week of remote work — compelling evidence of how valuable this non-monetary benefit is to workers.

In addition to where team members work, flexibility can come in the form of when they work. Offering alternative work schedules, an especially valuable benefit for parents, can make the difference between having the best employees and losing them to a competitor who is willing to bend on this issue.

Regardless of their rank or length of tenure at a company, employees want and need the prospect of advancement in order to be happy and loyal to their employers. That means companies must provide clear career growth paths for all team members and job candidates.

Our job sentiment survey results support this conclusion. Roughly 20 percent of respondents said they are thinking about leaving their companies because of a lack of growth opportunities. And since only 25 percent of respondents did not have job-search plans in mind for this year, the lack of career advancement options presents one more reason for the remaining 75 percent to consider jumping ship.

Another 25.6 percent of respondents citing dissatisfaction with their current employer as the main reason they are seeking a new role. As such, today’s commercial real estate firms must offer growth opportunities and communicate them properly to team members and potential hires if they want to attract and retain the best talent in the industry.

In today’s job market that favors candidates, job seekers won’t wait around too long for potential employers to make them an offer, especially as more positions become available.

According to the Department of Numbers, Texas added 68,000 jobs in April and 74,200 in May, more than any other state. That means the market is growing. Competition for top talent is becoming increasingly intense, and companies must distinguish themselves in order to hire and keep the best and the brightest in the business.

Having a finely tuned interviewing process is one way that commercial real estate firms can get a leg up on their competitors. Our survey revealed that more than 65 percent of respondents feel that hiring companies should hold no more than three to four interviews before making an offer, and 98 percent of respondents indicated that the hiring process should be completed within two months. In fact, 65 percent said they would expect an offer within a month of first contact.

Commercial real estate firms should also be careful about the mix of in-person vs. virtual interviews they conduct with candidates. Half of the respondents to our survey said they would rather have a combination of face-to-face and remote interviews than all of either type. RETS’ view is that while digital is fine for initial interviews, once the candidate has progressed to a third or fourth meeting, in-person is best.

Speaking of progressing, including C-suite executives in late-stage interviews is a great way for companies to attract the interest of top talent. People know that time is valuable, so when a CEO or vice president meets with a candidate, that individual knows the hiring company means business.

Partnering with a recruiting firm with a proven track record can help companies hone their interviewing process to provide them with a significant advantage in the current competitive market.

By being willing to be flexible, providing a clear growth path and maintaining an efficient interviewing process, companies can remain competitive in the ongoing talent wars now and for the long term.