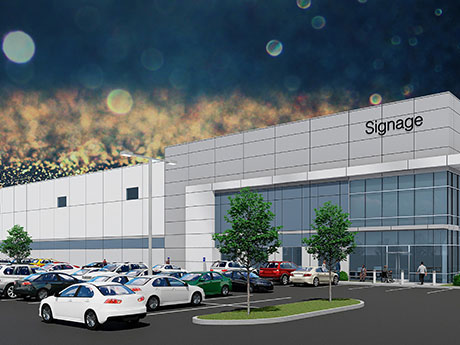 The former Huntley Outlet Mall is being transformed into Class A warehouse space.

The industrial market will be forever changed by the COVID-19 pandemic. Before the pandemic, demand for industrial space was closely tied with gross domestic product (GDP), with demand rising and falling alongside the U.S. output of goods.

The pandemic has accelerated an already shifting economy to an “on-demand” economy. This shift was created by technology companies fulfilling consumer demand via the immediate provisioning of goods and services, and has now led to industrial warehouse demand being more in line with consumer spending versus GDP.

Consumer spending and personal income are at all-time highs, with e-commerce sales growing exponentially throughout 2020 and 2021. Companies have been leasing warehouse space at a meteoric rate, driven by the need to store goods to accommodate the demand and mitigate risk from supply chain complications that have been brought on by the pandemic.

Over the past two years, millions of square feet of warehouse space in the Chicagoland area have been leased for e-commerce use to tenants such as Walmart, Wayfair, Hello Fresh, Imperfect Foods and, of course, Amazon. Additionally, as traditional brick-and-mortar retailers transition to greater online sales, they require more warehouse space for goods storage, which has led tenants such as Target, Walmart, Lowe’s, Home Depot, Petco and Crate & Barrel to lease some of the largest available warehouses in the market.

So, what does this new paradigm of industrial demand mean for future expansion in a market like Chicago? Chicago is a dense, established industrial market that is constrained for land. Most of the building stock is older, without the ceiling heights, technologies and building specs to meet the requirements of modern e-commerce companies. Therefore, to meet the current and future challenges of bringing 21st-century product to today’s on-demand tenants, owners and developers have been compelled to be creative, seeking out unique opportunities.

Attracting e-commerce tenants means locating in population growth areas, investing in technology and having strong access to highways. There are also cost factors. While not always the case, current industrial rental rates are higher than some retail and office rents. With an average lease-up time of only one quarter for new industrial product in Chicago, developers are still moving forward with industrial development, despite the high costs of construction materials and land prices.

Some developers are purchasing land with existing structures and converting those structures to industrial space. In Bensenville, where net rental rates for warehouse space have approached double digits, Prologis and ML Realty Partners recently purchased more than 100 residential homes for $64 million, demolishing the homes and building four warehouses totaling approximately 1.3 million square feet. Three of these facilities have been leased, prior to construction completion, to logistics users.

In Northbrook, Dermody Properties has Allstate’s 186-acre campus under contract, with the intention to redevelop the former headquarters, which includes close to 2 million square feet of office space, into industrial space. In the current market, demand for warehouse space exceeds that of second-generation suburban office space. In some cases, warehouse rental growth has accelerated so much that industrial asking rents are very close to asking rents for Class B suburban office space.

In Huntley, a joint venture between Craig Realty Group, The Capital Cos. and The Prime Group is in the process of redeveloping the former Huntley Outlet Mall. The joint venture acquired the outlet mall from Simon Property Group in 2016 and determined that industrial is the highest and best use for the property. The site is located at a four-way interchange along I-90 in Kane County, where the population has grown by almost 40 percent over the past 20 years. The developer will be replacing 300,000 square feet of retail space with over 700,000 square feet of Class A warehouse space.

Given the current market dynamics, owners and developers will need to retain a creative approach to new projects in 2022 and beyond. E-commerce growth is expected to moderate this year from inflated highs driven by the pandemic, only to correct down to the well-established pre-pandemic trend of double-digit annual growth, meaning that demand for space should remain strong.

Unlike some other markets, Chicago has not experienced overbuilding, with a 92 percent stabilization rate amongst buildings that were built between 2015 and 2021. Accordingly, the need for new warehouse products should remain strong throughout the year.

Supply chain issues are expected to ease over the course of the year, but a new challenge — inflation — is on the horizon. However, inflation brings new opportunities, as retailers such as some discount stores that have been slower to venture into the e-commerce world, will continue to need warehousing space. Ultimately, there is enough opportunity and demand in the e-commerce world to support additional inventory in Chicago, and developers are eager to find innovative ways to capitalize on that demand.

Mark Deady is a director with Newmark. This article originally appeared in the March 2022 issue of Heartland Real Estate Business magazine.