The Secret Is Out About Investment in Columbus, Ohio 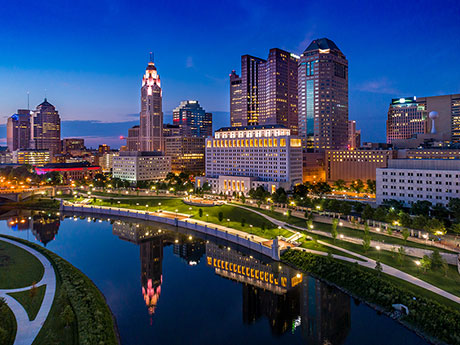 Columbus, Ohio has experienced an influx of institutional investment in recent years.

There was a time when an investment in the Columbus, Ohio commercial real estate market had to be justified to outsiders and required a higher return to attract investors. After all, it sits squarely in “fly-over country” in the heart of the rust belt.

With the exception of getting a superior return, why would an investor choose Columbus, over say, New York or Chicago? But that’s all changed. Cap rates are now as low as, or lower than, other major markets. Investors have been driven to those markets, despite having a lower cap rate, because they knew rent growth was continuous and the sales price would appreciate over time.

For decades, Columbus’ sales prices had remained stagnant due to a lack of increase in lease rates. However, over the past two years, lease rates have been rapidly increasing in the industrial market, and projections expect that trend to continue.

The Columbus office market hasn’t seen the same rental appreciation — yet. But projections indicate that there will be rental appreciation in office as well, mostly due to increased demand and lack of speculative development over the past two years, but also due to rising land and construction costs.

A series of events and circumstances have converged in Columbus, Ohio, shaping not only the city but the region into one of the more attractive markets in the Midwest and revealing what was, for a time, a hidden gem.

“Columbus has a young, growing and educated population with a lower cost of living than the coasts,” explains Matt McQuade, managing director of business development for One Columbus, the city’s economic development arm. “The demographics of the Columbus region are typically a major competitive asset,” says McQuade.

Columbus has one of the most educated and diverse talent pools in the country. Aside from the region being home to 52 colleges and universities, including The Ohio State University, it also has one of the highest concentrations of college students in the U.S. — many of which remain in the city long after graduation.

Columbus also continues to be one of the most affordable cities in the country and recently ranked 24th out of 155 large U.S. cities on GoodHire’s list of most affordable places to live and work in 2022. This combination of a steady pool of talent, affordability and economic growth has fueled Columbus’ population growth.

Even its suburbs have experienced record growth. Six of the city’s suburbs’ populations have increased at a rate that exceeds the growth of Columbus, including New Albany, which has grown by 40.1 percent since the 2010 census, and whose development will continue due to the recent announcement that the suburb will be the new home of Intel’s pair of semiconductor manufacturing facilities.

When the announcement was made in late January that Intel had selected Central Ohio for its first new semiconductor manufacturing facility in 40 years, it instantly set into motion a trajectory that will transform the region.

“It’s the most visibility in a single day that we’ve likely ever received,” says McQuade. “Not only did it signal to the market that the semiconductor industry was coming here, but it also signaled to all innovative companies that Columbus is a market worth serious consideration,” he adds.

It’s a pattern the region has seen before. When clothing retailer, The Limited (now L Brands), continued its expansion, more marketing and advertising firms appeared to earn business supporting projects outsourced by the company. When Honda opened its facility in Marysville, companies that manufactured parts or tested products expanded in the region as well.

The difference with the Intel announcement is scale. The applications for semiconductor chips are ubiquitous — from automobiles to aircraft to consumer electronics and home appliances; few industries are untouched by the tiny transistors.

The implications of a behemoth such as Intel coming to the region will extend into every nook and cranny of the Columbus economy, from education to workforce development to housing to transit to infrastructure and beyond — no element of the region’s economy will be unaffected. As Columbus transforms itself into the “Silicon Heartland,” it will only add to the appeal for institutional investors.

The pandemic threw the world into a tailspin when it abruptly arrived in early 2020. The effects it had were far-reaching. Some effects were anticipated, yet others weren’t as apparent.

When the government injected roughly $5.2 trillion into the national economy in the form of stimulus checks, increased unemployment benefits and pandemic relief loans, a few things happened.

Simultaneously, e-commerce fueled growth in the industrial market, pushing vacancy rates down to less than 3 percent, and drove absorption to record highs.

Geographic location and supply chain flexibility is a major driver for the industrial market, notes McQuade. Columbus’ geographical location puts half of the country within reach with just an eight-hour drive, making it a logistical hotspot.

Additionally, with the ability to work from anywhere, many workers fled from cities with exorbitant costs of living and relocated to more affordable, thriving cities. Again, like Columbus.

This pause in office work also resulted in a two-year hiatus in constructing new office space in Columbus, which will likely have an unintended effect, causing rental rates to increase. With all the other ingredients in place, the recipe for an office market stronger than pre-pandemic levels are in place, making Columbus appealing from a risk-to-reward standpoint for investors.

The Central Ohio market attracts a broad spectrum of institutional investment firms, including a mix of public and private REITs and fund managers, including sovereign wealth funds. Local investors include family trusts, 1031 buyers and growing businesses looking to offset earnings.

Private equity groups tend to dominate the sector in the Columbus office market, and prominent investors include Group RMC, Priam Properties, Alidade Capital, Ravinia Capital Group, Zamir Equities and Tempus Realty Partners. These investors primarily target assets ranging in value between $10 million to $100 million, with the goal of acquiring assets at prices below replacement cost. Many seek out the market due to its population growth and even its millennial concentration.

As institutional investment firms continue to seek out the Columbus market, it will present challenges for local investors, creating a barrier as they compete with firms with vast amounts of capital. The competition drives up purchase prices and cap rates, which will also impact real estate taxes and eventually trickle down to tenants.

However, the upside is that it likely will stabilize the market since investors of this caliber can withstand the tides of an economic downturn, reducing or nearly eliminating the likelihood of default.