The Sky is Not Falling for Miami’s Retail Market as Healthcare, Dining Activity Soars 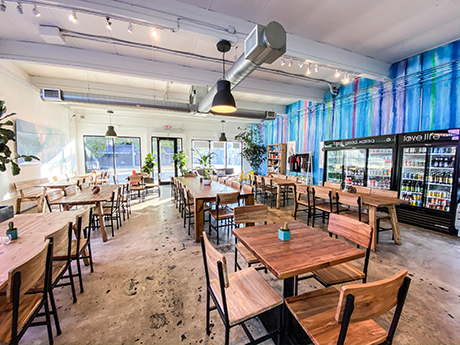 Pictured is the interior of Love Life Cafe, a plant-based dining concept that opened recently at the 545wyn office building in Miami’s Wynwood neighborhood.

When the world shut down in March 2020, “Chicken Littles” everywhere proclaimed the end of one of the primary asset classes in commercial real estate: retail. Retail tenants largely abandoned expansion plans and entered survival mode by shifting focus to seeking rent abatements and lease restructurings.

Fast forward two years and any lingering uncertainty about the survival of retail has waned, and, today, we seem to be in one of the stronger landlord markets in recent memory. What drove this radical shift from fear and hesitation to boundless market optimism?

Medtail in Miami
Healthcare businesses appeared to thrive during the pandemic as most were able to remain operational through state and local “shut down” orders. Many of these businesses used the pandemic as an opportunity to pounce on large spaces vacated by big box retailers and service-oriented businesses, like nail salons, barbershops and dry cleaners that could no longer make their rent with reduced foot traffic.

Primary care groups and urgent care clinics, especially those guided by business savvy private equity sponsors, covet the marketability and accessibility of retail spaces on the ground floor — they are no longer content with “Medical Office Building Suite 303” overlooking the parking lot. Vacant retail spaces ranging from 3,000 to 15,000 square feet were quickly backfilled by these growing medical groups.

Given healthcare’s staying power regardless of economic climate, these businesses have the confidence to sign up for top-of-market rents, which are driving up rental rates around the market.

Time to eat
Large restaurant groups also had the financial wherewithal to survive the pandemic and began gobbling up second-generation spaces between 1,500 to 3,000 square feet to expand their operations with both new and established concepts. Out-of-state groups appeared to lead the charge, and, in the last 18 months, landlord representatives have been fielding weekly calls from numbers with area codes keyed to the Northeast.

These out-of-towners seem to have been lured to Florida by lax COVID-19 restrictions, lower taxes and year-round sunshine. In the face of rising construction costs, many restaurateurs felt opportunistic and focused solely on second-generation spaces, even if not in ideal locations. They seemed content to trade high rents for the perceived “ease” of adapting a second-generation space.

However, while healthcare businesses typically stick to standard buildouts, restaurateurs require custom layouts, especially when establishing new concepts. And, although there are many advantages to leasing a former restaurant space equipped with infrastructure (i.e. grease traps, hood systems, customer bathrooms, etc.), these restaurateurs typically still require a building permit to finish their retrofit of a second-generation space.

Given Miami’s overwhelmed and inefficient municipalities, it often takes restaurateurs twice as long as they might expect to complete a buildout. Indeed, it may now take three to five months to obtain approval for building permits after submitting architectural plans. An added wildcard is that many spaces require upgrades to comply with current zoning codes.

For example, Wynwood, a historically industrial neighborhood, has now evolved into a dense retail, office and apartment submarket.

Will the fight against zoning requirements and construction timing begin to discourage these out-of-town restaurant groups from coming to Miami?

Our best guess to what Miami’s retail market will look like the next couple years is for there to be a new wave of vacancies as restaurateurs’ profit margins are squeezed by high rents and inflation’s impact on operating costs.

On the other hand, large restaurant groups and healthcare businesses are likely to fare well due to price inelasticity among the patrons who frequent high-end restaurants and the inherently unlimited demand for healthcare services, respectively.

Consider further that these businesses will be better positioned to pay competitive wages in a contracting labor market, and there appears to be no “easy” path for displaced service-oriented retailers to get back into the few highly desirable spaces still available. Stay tuned.

— By Gianna Blanco, Vice President, NAI Miami. This article was originally published in the May 2022 issue of Southeast Real Estate Business.