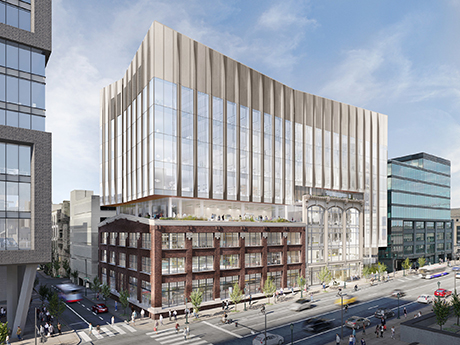 The site for the new life sciences project is adjacent to the University of Pennsylvania and Drexel University and within walking distance to several academic medical centers. (Rendering courtesy of Breakthrough Properties/KieranTimberlake)

PHILADELPHIA — A joint venture between Tishman Speyer and Bellco Capital has purchased a development site at the 2300 Market Street city block in Philadelphia’s Center City district. The joint venture, which goes by the name Breakthrough Properties, plans to redevelop the site into 200,000 square feet of life sciences space.

The site is located adjacent to the University of Pennsylvania and Drexel University and within walking distance to several academic medical centers. The property will sit between the city’s Rittenhouse Square and University City neighborhoods, as well as near the 30th Street Transit Station that is serviced by SEPTA, Amtrak and trolley and commuter rail lines.

The development team plans to deliver the laboratory and research and development spaces by 2024.

Breakthrough has enlisted KieranTimberlake, a Philadelphia-based architectural firm, as the project architect and Cushman & Wakefield as the exclusive leasing agent. All Breakthrough properties are designed to achieve LEED Gold certification, according to the developer’s website.

Philadelphia has emerged as one of the leading life sciences clusters in the country. Greater Philadelphia ranks No. 1 nationally for the National Institutes of Health (NIH) Grant Funding for cell and gene therapy and has attracted over $3.8 billion in venture capital and NIH funding in 2021 alone. The city is home to more than 730,000 professionals who hold degrees in engineering and science fields, according to Breakthrough.

“Philadelphia has quickly established itself as a leader in the cell, gene and mRNA therapy space, which is driving increasing demand for high-quality lab space,” says Aaron Kazam, Breakthrough’s senior vice president of acquisitions. “We are thrilled by this opportunity to deliver one of the premier research and development buildings in the country.”

Philadelphia-based D2 Capital Advisors consulted with Breakthrough on the site selection and is serving as financing advisor for the project. Costs for the land acquisition and development were not disclosed.

Including the Philadelphia project, Breakthrough now has over 4.6 million square feet in its development pipeline across the United States and Europe, including projects in San Diego, Boston and England. The 2300 Market Street project is the first development in Philadelphia for Breakthrough, which was established in 2019.

Tishman Speyer is a global real estate owner, developer and investor based in New York City. Bellco Capital is a biotech investment firm based in Los Angeles. A couple weeks ago the companies raised $3 billion in capital for the Breakthrough Life Science Property Fund that will fund Breakthrough’s global portfolio of life sciences real estate.