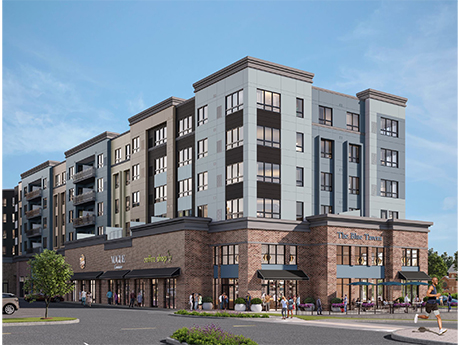 The Crossings at Brick Church Station will include 820 mixed-income rental units, a 1,200-space parking garage and a public promenade and plaza, as well as 200,000 square feet of commercial space.

EAST ORANGE, N.J. — Real estate development firm Triangle Equities, along with investment partners Goldman Sachs, Basis Investment Group and co-developer Incline Capital, recently broke ground on The Crossings at Brick Church Station in East Orange, a suburb of Newark in Essex County. The $500 million mixed-use redevelopment project will be one of the largest real estate developments ever constructed in the city, according to East Orange Mayor Ted Green.

Upon completion, The Crossings will comprise approximately 200,000 square feet of commercial and restaurant space, including a new ShopRite grocery store. The development will also include 820 mixed-income rental units, a 1,200-space parking garage and a public promenade and plaza.

Located on 533 Main St., the transit-oriented project will be situated near NJ Transit’s Brick Church Train Station, which the City of East Orange is revamping. The Crossings will replace the former Brick Church Plaza and include a nine-story building, a five-story building and a seven-story parking garage.

March Associates Construction, based out of Wayne, N.J., will serve as the construction manager and general contractor for the project.

ShopRite will anchor The Crossings at Brick Church Station in East Orange, N.J. (Click on image to see larger version)

The Crossings will be built in two phases and is scheduled for completion in the fourth quarter of 2024. Over 85 percent of the retail space in the first phase has already been preleased, according to Triangle Equities.

Lester Petracca, president of Triangle Equities, says that the development team was able to use various financial tools to fund the development, including capital from PNC Bank.

Triangle Equities plans to be a long-term holder of The Crossings and will be part of the East Orange investment community “for decades to come.” The Whitestone, N.Y.-based firm specializes in value-add developments, redevelopments, public-private partnerships and projects that require alternative financing.

— By Channing Hamilton and John Nelson