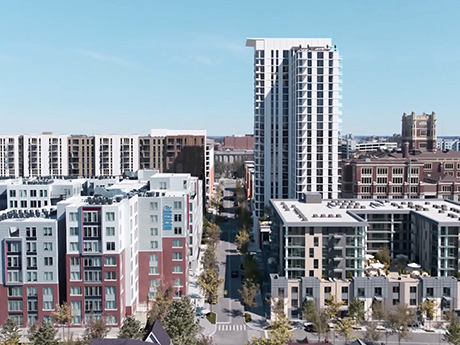 CINCINNATI — A partnership between two regional developers, Indiana-based Trinitas Ventures and Ohio-based Crawford Hoying, has started construction of the $250 million second phase of The District at Clifton Heights, a mixed-use project in Cincinnati.

The District at Clifton Heights is located across the street from the University of Cincinnati at the site of the former Deaconess Hospital. The first phase of the project centered on construction of The Deacon, an eight-story, 351-bed student housing building that opened in August 2019. Development costs for all phases of the project are estimated at $640 million.

The largest piece of the second phase also revolves around student housing. Chicago-based Core Spaces is leading the development of a 14-story tower that will feature 1,112 beds across 380 units. Branded Hub Cincinnati, the project is scheduled for completion in advance of the fall 2024 semester.

The other major component of the second phase involves the development of Hotel Celare, a $65 million project. The hotel will rise seven stories, house 171 rooms and 18,000 square feet of meeting space and feature a rooftop bar overlooking the campus entrance. Crawford Hoying is leading the development of the hotel, which is slated for a summer 2024 delivery.

The development team worked with the Port of Cincinnati and the City of Cincinnati to secure $40 million in tax increment financing for the project to fund public improvements, improved streetscapes and a public parking garage. At full buildout, The District at Clifton Heights will house some 3,000 residents and add more than 2,000 jobs to the local economy, the development team estimates.

In addition, the development is projected to generate nearly $11 million in annual tax revenue for Cincinnati and Hamilton County. Future phases will include traditional multifamily and seniors housing communities, as well as commercial space.