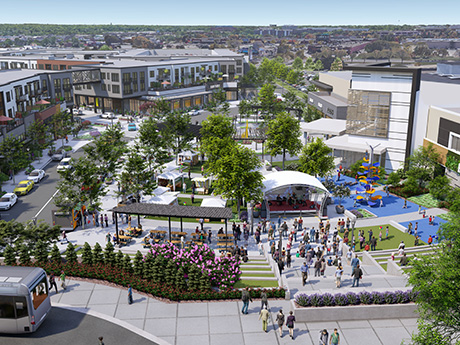 Many developers are buying Class B shopping malls and redeveloping them into new, mixed-use projects. This rendering shows plans for Hawthorn Mall in Vernon Hills, Ill. The redevelopment by Centennial Real Estate and Focus will incorporate apartment units.

The redevelopment of Class B malls into mixed-use, open-air centers has continued to grow in popularity as shopping center owners and operators look to compete with e-commerce through the delivery of thoughtful spaces that provide an experience for visitors.

EDENS purchased North Dekalb Mall last year with plans to redevelop the property into a mixed-use project. This week, a Development of Regional Impact (DRI) application was filed with the Georgia Department of Community Affairs detailing plans for the project.

Located roughly seven miles outside in Atlanta in North Decatur, the development is set to include 300,000 square feet of office space, 200,000 square feet of hospitality, 150 multifamily units and 1,700 townhomes, in addition to retail and restaurant space. A timeline for the project and further information was not disclosed.

The property’s previous owner, Sterling Organization, teamed up with developer Hendon Properties and Lennar Commercial Investors in 2014 with plans to turn the 622,297-square-foot enclosed mall into an open-air shopping center, which ultimately did not come to fruition.

The City of Crestwood, located roughly 12 miles outside St. Louis, is working with Dierbergs Markets and McBride Homes to redevelop a 47-acre site formerly occupied by Crestwood Mall into a mixed-use destination.

The proposed development, to be named Crestwood Crossing, is set to include a 70,000-square-foot grocery store, 23,000 square feet of restaurant and retail space, 81 single-family homes, an open-air plaza and green space.

Mark Kornfeld and Grant Mechlin of Sansone Group represented Dierbergs and McBride Homes in the acquisition of the development site. Construction is set to begin as early as this fall with a projected development timeline of 24 months.

The redevelopment of Crestwood Crossing has been in the works since the mall closed in 2013, and this is the fourth plan for the property in less than a decade. Demolition wrapped up in 2017 and the site has sat empty since.