Posted on May 18, 2022 by John Nelson in Civic, Development, Healthcare, Maryland, Southeast 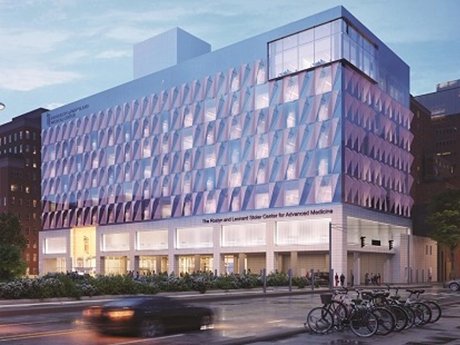 The Roslyn and Leonard Stoler Center for Advanced Medicine is expected to be completed in mid-2025.

BALTIMORE — The University of Maryland Medical Center (UMMC) has broken ground on the Roslyn and Leonard Stoler Center for Advanced Medicine, a nine-story patient care tower located on the UMMC campus at 22 S. Greene St. in downtown Baltimore. The facility will serve as the new entrance to the UMMC and house the University of Maryland Marlene and Stewart Greenebaum Comprehensive Cancer Center (UMGCCC). The $219 million development is expected to be completed in mid-2025. The project, which will more than double the cancer center’s footprint, will feature 198,000 square feet of new space and 42,000 square feet of renovated space. UMMC is funding the tower with $100 million from the state of Maryland, along with private donations and UMMC capital funds. UMMC has raised more than $51 million from 130 donors as part of UMMC’s Building for Life Campaign to fund the project. Clark Construction will serve as general contractor for the project, which is estimated to be wrap up in 32 months.