US Economy Added 199,000 Jobs in December, Lower than Previous Month and Below Wall Street Expectations

Posted on January 7, 2022 by Julia Sanders in District of Columbia, Southeast 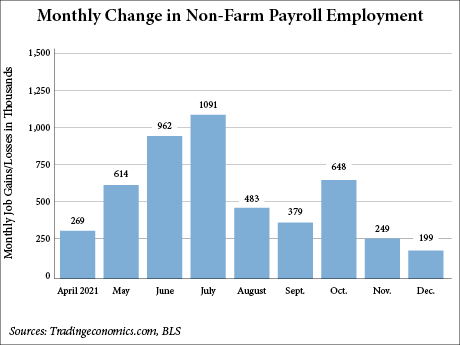 WASHINGTON, D.C. — Total nonfarm payroll employment rose by 199,000 jobs in December, while the unemployment rate declined from 4.2 percent in November to 3.9 percent, according to the U.S. Bureau of Labor Statistics (BLS) report that came out Friday, Jan. 7. A closer look at the data shows that employers added 211,000 private sector jobs, while the government shed 12,000 jobs.

The employment numbers were much lower than the Dow Jones’ estimate of nonfarm payroll employment of 422,000 but the unemployment rate was below the predicted 4.1 percent rate, according to CNBC. In February 2020, the last full month not impacted by the COVID-19 pandemic, the unemployment rate was 3.5 percent. The news outlet also noted the BLS report included data from Dec. 12, which is when some of the highest reported cases of Omicron variant were found.

The highest amount of job gains last month was in the leisure and hospitality sector, which increased by 53,000 jobs. Other notable job gains occurred in professional and business services (+43,000), manufacturing (+26,000), construction (+22,000) and in transportation and warehousing (+19,000). Last month, little to no change occurred in employment for the retail trade, financial activities, healthcare, government and information and other services sectors.