Posted on April 1, 2022 by Julia Sanders in District of Columbia, Southeast 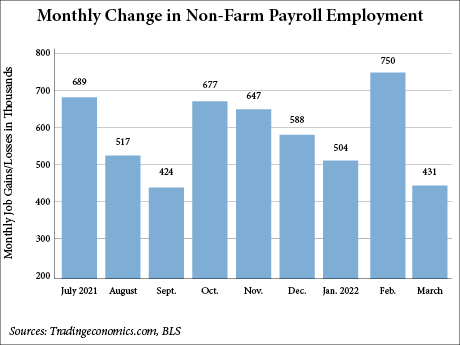 The BLS also reports that the average hourly earnings for all employees on private nonfarm payrolls increased by 13 cents to $31.73 last month. This figure was much higher than what it rose to in February, which only saw an increase of 1 cent in February over the prior month. Over the past 12 months, the average hourly earnings have grown by 5.6 percent. Wages are still being outstripped by inflation as the BLS found that the consumer price index (CPI) rose by 7.9 percent in February compared to February 2021.

As it was in previous months, the biggest job growth was led by gains in leisure and hospitality (+112,000), including growth in food services and drinking places (+61,000). However, since its pre-pandemic level in February 2020, employment in the sector is still down by 1.5 million workers, or 8.7 percent.