Posted on October 7, 2022 by John Nelson in District of Columbia, Southeast 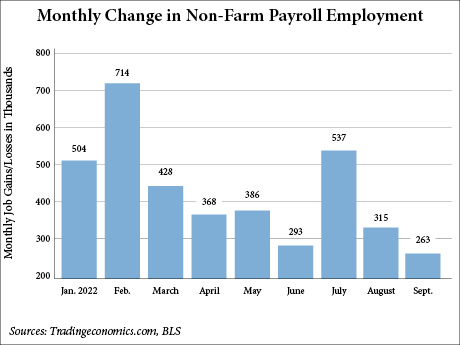 The September performance fell narrowly short of the Dow Jones estimate of 275,000 but exceeded expectations for the unemployment rate, which the economists expected to remain at 3.7 percent, according to CNBC.

Lawrence Yun, chief economist for the National Association of Realtors, says the job gains in September for the office-using sectors were encouraging, but he emphasizes that the lack of office workers in downtown districts will continue to have a ripple effect on other economic sectors.

“The traditional office-using jobs in the professional business service sector boomed, with 46,000 monthly net gains and over 1 million in a year. Yet office vacancy rates remain high, and very few new office buildings are being started,” says Yun. “That means retail shops in the suburbs will do well, as workers are at home and not downtown. Though there has been some return of housing demand closer to the city recently, the long-term trend could be in the outer suburbs.”

The U.S. office vacancy rate stood at 15.1 percent at the end of the third quarter of 2022 , an increase of 10 basis points from the second quarter, according to research from Colliers. This rate is a nearly 350-basis-point increase from fourth-quarter 2019, the last quarter unaffected by the COVID-19 pandemic.