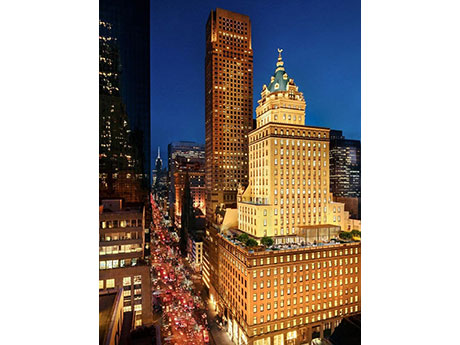 Aman New York now occupies the top 20 floors of the Crown Building, which was originally constructed in 1921.

NEW YORK CITY — Walker & Dunlop Inc. has arranged $754 million in financing for Aman New York, a luxury hotel and condo development in Midtown Manhattan. Aman New York occupies the top 20 floors of the 100-year-old Crown Building at the corner of 57th Street and Fifth Avenue, across the street from Trump Tower. OKO Group was the developer.

The 95,000-square-foot residential portion includes 22 units, while the 117,000-square-foot hotel section contains 83 guest rooms and suites. The rooms are among New York’s largest, and the hotel is the only one in New York to offer working fireplaces in each room. The lower floors of the building remain retail space.

The hotel portion is scheduled to open on Tuesday, Aug. 2. Reservations will be available beginning Monday, July 25.

The development is Aman’s first U.S. urban residence project and provides special features for owners such as private entrances, plus access to three dining venues, a jazz club, wine room and 25,000-square-foot Aman Spa. Nearly all of the condos are pre-sold, with one of the units selling for $55 million, marking one of the priciest residential transactions in New York so far this year.

Originally built in 1921, the Crown Building was the first home of the Museum of Modern Art. It was renamed in 1983 for its crown-like appearance when illuminated.

Aaron Appel, Keith Kurland, Jonathan Schwartz and Adam Schwartz led Walker & Dunlop’s team in structuring the debt financing, which JPMorgan Chase provided. The three-year financing consisted of a bridge loan and a condo inventory loan, which is a type of loan used by developers to pay off maturing construction loans on a newly completed condo building.