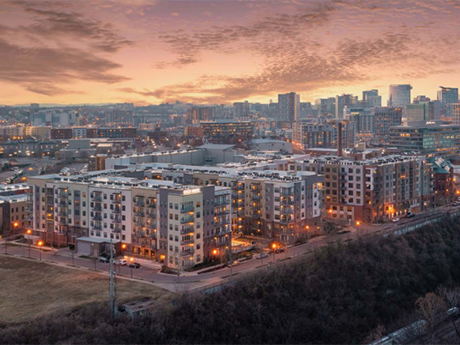 Inflation and a New Era of Monetary Tightening

Amid 40-year high inflation rates, home prices that have surged by over 40 percent in the past three years and double-digit price increases in basic necessities such as food, gas and electricity, the United States seems to be beset on all sides. Inflation has become the question of the day with little relief even after monetary tightening began earlier in the year. After a quarter point increase in the Federal Reserve target rate in March, the Fed implemented a whopping 50 basis point increase in the target Federal Funds rate in May after April inflation remained at 8.2 percent, near the March high of 8.6 percent.[1] The central bank’s goal is to reduce inflation to an annual rate of approximately 2 percent.

The employment base, the Fed’s other prime objective, seems to remain strong. Unemployment (at 3.6 percent in April) remains low and employment growth of 390,000 in May beat economist expectations.

The Fed’s job now is to beat inflation and prevent it from becoming embedded in consumer expectations. Why? Because once inflation becomes embedded in expectations, it changes consumer behavior and becomes somewhat of a self-fulfilling prophecy, making it more difficult to tame without throwing the economy into a recession. In fact, it may be too late for that already. The New York Fed Survey of Consumer Expectations indicates that consumers expect inflation to remain near 6 percent over the next year and just under 4 percent over three years — well above the Fed’s goal of near 2 percent inflation. Additionally, the latest estimate of gross domestic product (GDP) growth for the first quarter (−1.5 percent) indicates that economic growth may have already turned negative, led by declines in private inventory investment, exports and government spending.

While it is easy to suggest in hindsight that the Fed was late to the game to tame inflation, economist expectations just six months ago were that inflationary pressures were all short term: accommodative monetary and fiscal policy stimulus, supply chain shocks related to the pandemic and a surge in demand for goods. Unfortunately, inflation has turned out to be stickier, further supported by geopolitical instability and significant increases in the money supply.

Whether or not the economy can withstand rapid monetary policy tightening at the same time the fiscal policy punchbowl has been withdrawn remains to be seen. An already tight labor market could limit continued corporate expansion, particularly as the labor force participation rate of prime working-age individuals remains below its pre-pandemic level.

Consumers may be in better shape today than they were heading into the Global Financial Crisis (GFC) of 15 years ago, given significantly less balance sheet debt. However, consumers have used up their excess savings from pandemic-era stimuli, and personal disposable income growth per capita has turned negative. These factors could impact expenditures going forward, the largest component of GDP.

A series of swift interest rate hikes that derail the housing and equity markets (which are already down by 16.7 percent year to date [S&P 500] as of mid-May) would only accelerate the degree to which households rein in their spending, increasing the chance of driving the economy further into recession.

Policy guidance is for monetary tightening, both in terms of increases in the federal funds target rate as well as shrinking the Federal Reserve balance sheet, with 50-point hikes possible at the next couple of Federal Reserve meetings in June and July.

As of May, estimates are for Federal Funds at around 2.0 percent to 2.25 percent by year-end, up from a 1.0 percent target currently. The perception that the Fed will now have to act more aggressively than in prior cycles has led to a rapid rise in Treasury rates, which rose from around 0.5 percent in August 2021 to over 3.0 percent in early May, as well as a steady climb in real rates (though the latter still remain in negative territory). However, notably, the yield on the ten-year Treasury declined to around 2.8 percent by mid-May after the Fed Funds target rate was raised on May 5.

Economists surveyed by the Philadelphia Federal Reserve Bank remained optimistic as of May, forecasting second quarter GDP growth at 2.3 percent, albeit down from a forecast of 4.2 percent in the previous survey, with GDP growth for the full year of 2022 forecast at 2.5 percent.

Mixed signals on consumer confidence, still-rising construction costs and an increase in 30-year mortgage rates to above 5 percent from 2.8 percent in early August 2021 have many worried about possible frothiness in the housing market; the Dallas Fed noted in a recent research piece that there were signs of a “brewing housing bubble.”[2]

This would stand in contrast to the strength of the residential market in 2021, where the desire for more space alongside reduced concerns over commuting distances led to double-digit gains in single-family home prices. Similarly, apartment rents are above pre-pandemic levels in many places and vacancy rates stand at record lows.

As a result, multifamily investment sales reached an all-time record in 2021 with almost $290 billion in transactions — more than double the total from 2020. Investment activity was most robust in Atlanta, Houston, Dallas-Fort Worth and Phoenix in the first quarter of 2022, with interest firmly having shifted away from coastal markets in favor of the Sun Belt region. Cap rates for the sector are at record lows, and per-unit pricing has risen 11 percent over the past four quarters to $239,000.

Part of the rebound in the multifamily market reflected a return by many renters who had vacated their urban apartments during the height of the pandemic, although vacancy levels were also flattened by the lack of new multifamily completions. However, Zelman & Associates reports that new completions are likely to be higher in 2022 than in 2021, modeling a 13 percent increase in starts this year. This sets the stage for more multifamily completions over the next three years than any comparable period dating back to 1988, with an above-average concentration in the suburbs.

However, just as supply is likely to increase, concerns over the pace of household formation have come to the fore, which could weigh on net absorption. Similarly, whether due to higher mortgage rates or home buying that was accelerated due to COVID-19, existing and new home sales are forecast to slow down. According to Fannie Mae’s housing market forecast (May 2022), total home sales are expected to decline by 11.1 percent in 2022 and by 11.6 percent in 2023.

Longer term, according to the U.S. Census Bureau, U.S. population growth increased just 0.12 percent year-over-year as of July 2021, the weakest annual rate ever for the country, reflecting elevated deaths through the pandemic and weak immigration trends. Zelman & Associates notes that annual population growth, which averaged 0.71 percent per year over the last decade, is forecast to increase by 0.39 percent growth per year for the 2020-30 decade.

While the multifamily market will face numerous headwinds in the year ahead, with U.S. average vacancy rates at 5.5 percent and effective rents up by 14.3 percent in the first quarter of 2022, the market has room for adjustment to much more ‘normalized’ levels of growth. With housing supply limited by the lingering effect of eviction moratoriums, delays in new construction cycle times and institutional investors absorbing an increasing share of single-family home purchases, multifamily fundamentals have outperformed Zelman’s recent forecasts, leading them to increase 2022 economic revenue growth to 7.8 percent from 5.8 percent.[3] Despite inflation, rising rates and war in Europe, the multifamily industry maintains many of the same strong fundamentals as it did at the end of 2021 and remains the top-performing commercial real estate asset class.

[1] Numbers reference the more broadly quoted CPI-U inflation index, although the Fed follows more closely the Core PCE inflation index which has followed similar trends but is up by 5.2 percent year-over-year as of March 2022.