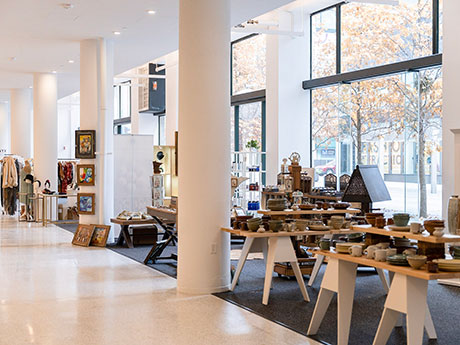 The Departments at Dayton’s opened in November with over 25 local artisans and vendors. The historic department store is being redeveloped.

The metro Minneapolis retail real estate market is healthy overall coming out of 2021, with suburban submarkets on fire in many cases and urban submarkets generally subdued.

A major overhang of supply was absorbed across the region last year as construction slowed dramatically, pushing retail vacancies down, rents up and sales prices of single and multi-tenant assets higher overall.

It’s a testament to the market’s overall stability and resilience given the multiple waves of COVID, and events surrounding the George Floyd case that was prosecuted last year in the city.

With many white-collar professionals still working from home and the center-cities tougher on mask mandates and vaccine requirements, the suburbs have shone the brightest. Vacancies were as low as 6 percent in some areas, with the overall market at 8.2 percent at year-end, according to the Minnesota Commercial Association of Real Estate/Realtors (MNCAR). Among the strongest performing submarkets have been Apple Valley, Maple Grove, Coon Rapids and Woodbury.

The metro’s eight regional malls are generally faring well, unlike in some other markets across the U.S. that are more over-supplied. That said, there’s some adaptive reuse going on, including in the northwest suburb of Maple Grove where a freestanding AMC theater on the periphery of The Shoppes at Arbor Lakes is being redeveloped to accommodate a retail store and several pad sites on what’s been a large parking lot.

Sites occupied by big banks also have been a redevelopment target as bank branches are trending smaller, opening up re-tenanting opportunities. Underutilized sites including France Avenue in Edina are seeing a high level of retail redevelopment interest as well.

With prime locations and spaces at a premium, particularly in the suburbs, competition among tenants has been fierce, with two or three interested retailers for many available spaces. Among the tenants expanding or moving into the market have been Chase Bank, Chick-fil-A, LA Fitness, McAlister’s Deli, PNC Bank, Raising Cane’s, Sportsman’s Warehouse and T.J. Maxx.

Additionally, a variety of swimming schools are actively looking in the market, as are car wash operators. In both cases, the service offerings are perceived to be affordable luxuries with retailers targeting consumers with disposable income.

While downtown Minneapolis has struggled to regain foot traffic with many workers still at home, there’s been no major exodus of office tenants from the central business district. In fact, retail rents in mixed-use properties downtown have held up, even increasing slightly over the past year, according to MNCAR. The market is poised for the return of office workers.

The retail component of the project, The Departments at Dayton’s, opened in November with over 25 local artisans and vendors marking the arrival of a compelling retail destination downtown.

Investor interest in retail properties has never been higher, with a variety of buyers (local and national) in the market, buoyed by the wide availability of equity and debt.

Over 2.2 million square feet of retail space traded in the metro area last year, capped by over $300 million in fourth-quarter sales alone.