Posted on January 13, 2022 by Katie Sloan in Features, Student Housing 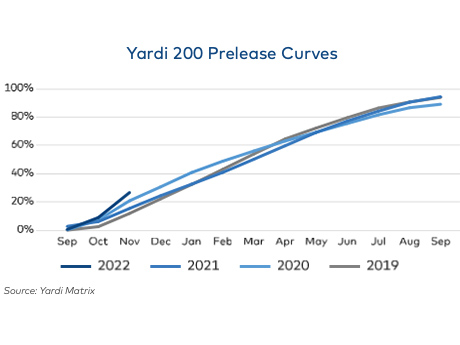 The fall 2021 pre-leasing period for student housing ended in September at an occupancy rate of 94 percent, up from 89 percent in 2020 and 0.4 percent from levels seen prior to the start of the COVID-19 pandemic in fall 2019.

Often lauded as a recession-resistant asset class, the student housing sector was able to add another feather to its cap over the course of the past year, proving that it is also pandemic-resistant.

The fall 2021 pre-leasing period ended in September at an occupancy rate of 94 percent, up from 89 percent in 2020 and 0.4 percent from levels seen prior to the start of the COVID-19 pandemic in fall 2019, according to the Yardi Matrix National Student Housing Report January 2022.

These numbers were seen within the company’s ‘Yardi 200’ markets, which include the top 200 investment-grade universities across all major collegiate conferences.

Student housing deliveries slowed in 2021, with just over 19,000 beds delivered at Yardi 200 universities as of December, down from more than 30,000 annual beds delivered over the past few years. Yardi predicts that 2022 will bring more deliveries at just over 25,000 beds.

There are more than 135,000 beds in various stages of development surrounding Yardi 200 universities, with 49,000 of those currently under construction. Most of these projects are concentrated in the Southern and Southwestern U.S. — specifically in Florida and Texas.

Student housing transaction volume began to slow prior to the pandemic after three consecutive years of over $3 billion sales at Yardi 200 universities. That volume picked up again in 2021, with strong leasing levels despite the pandemic catalyzing a greater number of investors to enter the space.

Sales volume surrounding Yardi 200 universities as of December totaled $2.8 billion, with an average price per bed of $67,000. Much like development activity, universities in the South and Southwest saw the greatest number of sales transactions during 2021.